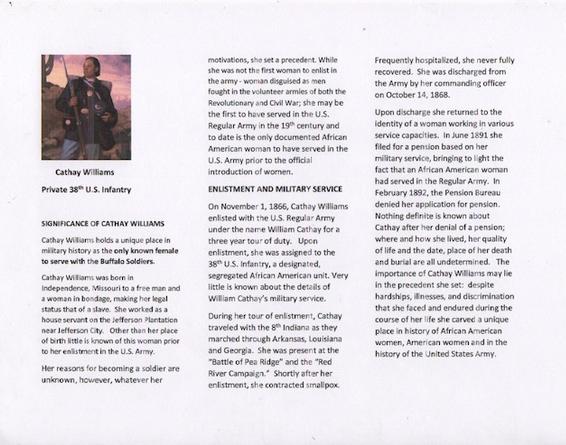 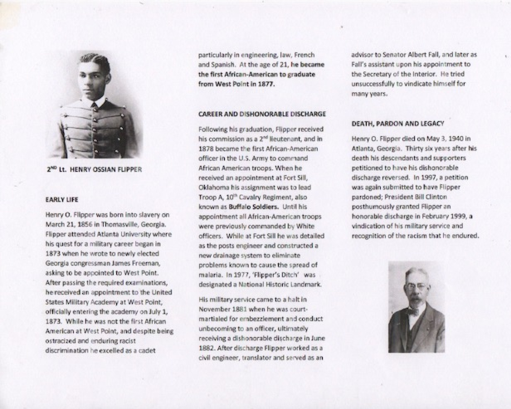 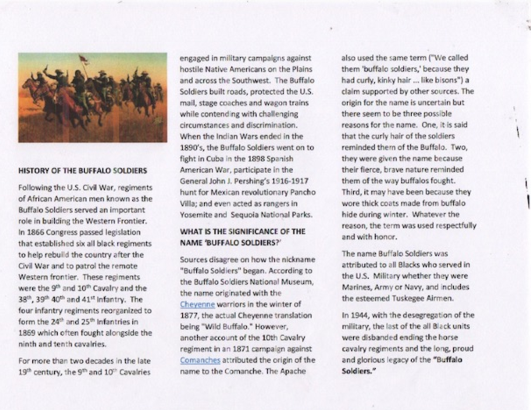 African-Americans have fought with distinction in all of this country's military engagements. However, some of their most notable contributions and sacrifices came during the Civil War. During that conflict, more than 180,000 African-Americans wore the Union Army blue. Another 30,000 served in the Navy, and 200,000 served as laborers, in engineering, hospitals and other military support projects. More than 33,000 of these gallant soldiers gave their lives for the sake of freedom and their country.

Shortly after the Civil War, Congress authorized the formation of the 9th and 10th Cavalry and the 38th, 39th, 40th, and 41st Infantry Regiments: Six African-American peacetime units. Later the four infantry regiments were merged into the 24th and 25th Infantries. At least 18 Medals of Honor were presented to Buffalo Soldiers during the Western Campaigns. Similarly, 23 African-Americans received The Nation's Highest Military Award during the Civil War. African-Americans have fought in military conflicts since colonial days. The Buffalo Soldiers comprised of former slaves, free men and Black Civil War Veterans were the first to serve during peacetime.

The Westward movement had begun, prominent among those blazing treacherous trails of the Wild West were the Buffalo Soldiers of the U.S. Army. These African-Americans were charged with and responsible for escorting settlers, cattle herds, and railroad crews. The 9th and 10th Cavalry Regiments also conducted campaigns against Native American Tribes on the western frontier that extended from Montana in the Northwest to Texas, New Mexico, and Arizona in the Southwest. Throughout the era of the Indian Wars, approximately twenty percent of the United Sates Cavalry troopers were African Americans, and they fought in over 177 campaigns. Their combat prowess, bravery, tenaciousness, and looks on the battlefield, inspired the Indians to call them "Buffalo Soldiers." Many Indians believe the name symbolized the Native American's respect for the Buffalo Soldiers bravery and valor.  Buffalo Soldiers down through the years, have worn the name with pride.

The Buffalo Soldiers participated in many military campaigns: The Spanish American War, The Philippine Insurrection, The Mexican Expedition, World War I, World War II, and the Korean Police Action.

History of the Original Buffalo Soldiers